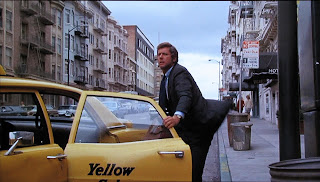 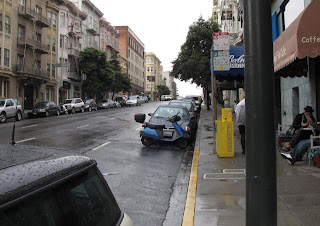 I've explored San Francisco in order to document the ultimate guide to movie locations from What's Up, Doc? For the next few weeks I'll be posting all the spots I've found in chronological order. Some of the spots have remained relatively unchanged after almost 40 years. Others, sadly, have been remodeled beyond recognition.
For instance, the opening scene at the San Francisco airport terminal has been severly altered. The original South terminal is still there; however, the baggage claim and entrance (where we are introduced to Howard and Eunice) has been extensively modified to the point I can't identify the exact location. Which is why I'm jumping forward to what I call the "pizza scene".
Not much has changed here, except now you can park for 2 hours instead of 1.
Posted by Hart at 3:58 PM