Close Encounters of the Barbra Kind No. 10 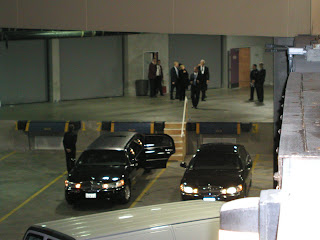 Yes I know it's hard to tell, but it is Barbra. My digital camera decided focus on the forefront. Why don't these cameras come with a Barbra auto-focus feature?

That's her in black (well, O.K. everyone is in black). The man behind her is Dick Gephardt. James is to the right (the white hair is the giveaway).

One interesting feature about the gala was toward the beginning when David Foster introduced his new protoge- his first performance in public. The guy sounded nice- reminded me of Frank Sinatra. A few years later my friend Robin and I were discussing the trip. She informed me that the singer was Michael Buble! I had forgotten. I knew who Michael Buble but I didn't remember that's the guy I say. I remember him after the gala when everyone was leaving, he was just standing there by the side doors in the auditorium. No one was bothering him. He was just standing there. I debated going up and asking for a picture. I decided not to. Big mistake. Now you can't get near him.

Getting back Barbra, we got to see her arrive at the Kodak theater around 3:30 p.m. the day before (Sept. 29th). Robin and I were walking around the complex, trying to determine where Barbra would enter from. We talked to a security girl and she told us Barry Manilow was arriving at 3:00 and Barbra at 3:30! Sure enough, she arrived and was ushered in. So we got to see her coming and going.
Posted by Hart at 6:36 PM No comments: 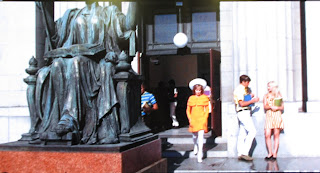 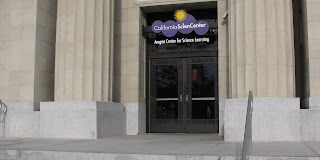 I did see On A Clear Day in the theater as I child. I don't remember it very well. The only thing I can remember is the opening and ending number from that first experience.
I remember being in awe with the stop-motion photography of the flowers growing (it's still an impressive piece of photogaphy today). The only thing was I couldn't figure out how they did it. It sounds silly now, but as a child you weren't exposed to such wonders of special effects as children are now. I remember asking my mother during the song "How did they do that?" I simply did not have a clue. I must have asked a little too loudly. My mother shussed me and whispered that they took a photo of the flower every day over time.
On a Clear Day is still one of my favorite Barbra songs of all time. I know this sounds strange but during the title song at the end of the movie, I keep thinking it was filmed on a Friday evening at sunset. I can still remember after seeing the movie, I get a Friday evening feeling when I think of the song. Don't ask why- can't explain it.
As it turns out, after visiting the location the movie shot above was indeed filmed around sunset (the golden hour). Still don't know what day of the week it was filmed.
Wanting to capture the scene with the same lighting I visiting the site in the late afternoon to capture the same shadows. As it turned out, it was a cloudy afternooon! I was losing the light, and there's nothing without the light! And I even waited until Friday to get the shot. Again, don't ask why.
A number of changes about the location since 1970 (or really 1969 since that's when it was filmed).
Most notably, the statue is not there. It was a movie prop. Confused me for a while when I visited the site. Wasn't sure if I was in the right place. Now that I see the scene again, it is kinda ackward to have a huge statue right smack in front and so close to the building entrance.
The white globe light has been replaced with signage.
The steps have also been modified for handicapped accessibility at the front door. There's a large wheelchair ramp off camera to the right. Handrails have also been added.
FYI- this building is located at Exposition Park in Los Angeles. While the story of OACD takes place in NY it was actually filmed in California.
Posted by Hart at 5:35 PM No comments: 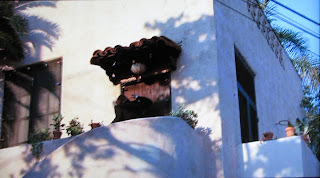 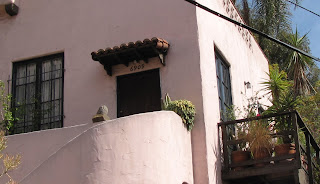 Another shot of Esther Hoffman's apartment. This photo is from a recent trip to Hollywood.
I visited this apartment location a few years ago with some friends during one of the Barbra reunions. While this apartment is visible from the street, the complex is gated and locked. As luck would have it, while we were there the girl who lived there was leaving the complex. We told her about the location. She didn't have a clue. We were more than happy to explain the significance of the apartment she lived in. She probably thought we were nuts but let us in to get a closer look. We even talked her into opening her apartment door so we could see inside (I could tell from the movie that the interior shots were from a sound stage and one look inside confirmed my intuition.)
During my most current visit, I took along some screen shots from the television, so I could match up the camera angles. Time restraints prevented me from coming back later to more closely match up the lighting (and the shadows). While in the movie this scene takes place early in the mornng (7:00 a.m.?), this shot was actually filmed more toward the evening. I was there around noon time. (I'll try for a reshoot next time I'm there).
While taking photos this time around again a lady walked out of the apartment and out the gate. With camera and screen shots from the movie in hand, I told her about the movie significance about the apartment. Turns out her daughter lives there and neither one knew about it.
As you can tell, the balcony has been replaced with wood and bars cover the window (to keep Barbra fans from breaking in?).
Posted by Hart at 5:02 PM No comments: 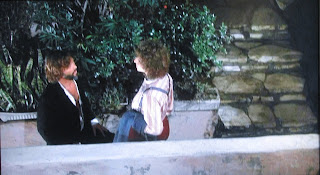 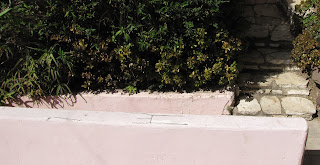 Esther Hoffman's apartment hasn't changed much through the years.
This was the movie that started it all for me. Soon after seeing What's Up, Doc? on network television, I started researching Barbra. People did a cover story on her about her upcoming movie A Star is Born in April 1976 (still my favorite People cover). It seemed every month some magazine or newspaper reported about the filming of the movie good and bad, but mostly bad. I couldn't wait for the movie to open.
The only problem was that I lived in a small town one county over from San Antonio. At the time I was 16 and wasn't allowed to drive into "the big city". I was also rated R and back then theaters around there were stricter about age requirements. To make matters worse, I looked like I was 14. My parents weren't about to drive me into the city to see an R-rated movie. It drove me crazy at the time.
Eventually in February 1977, A Star is Born came to my town and I finally got to see it. And soon after I was allowed to drive to San Antonio, which was a good thing because A Star is Born stayed on at least one screen on and off for about a year. Successful movies in general would stay a lot longer in the theaters back then. After a run in the major theaters they would move over to smaller neighborhood theaters and drive-in followed by $1.00 movie houses the return engagements "back by popular demand".
In total, I saw A Star is Born 16 times on the big screen, which was a lot for me.