Way We Were filming locations - Part 2 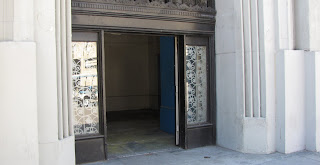 Looks like the Office of War Information has cleared out of their office. This shot is from the back lot at Warner Brothers in Burbank.
I still have misty watercolored memories of when I saw this premiere on network T.V. Best I recall, it was on the ABC Sunday night movie sometime after I saw A Star is Born in the theater, so I would guess the fall of 1977. Granted, I could do some research to get the exact dates and details but I'm just winging it here. I also remember when they repeated the movie again on network T.V. sometime during the first half of 1979. It was up against the network premiere of Rocky on another channel.
Another thing I remember is that the movie looked different on T.V. I was still not familiar with film aspect ratios and pan and scan on T.V. But even then I could tell I was missing something. I knew from seeing the film on the big screen that some images were not right. Both characters should be in the shot, but could fit the format of the T.V. screen. Even when the first videotapes came out the film was still cropped. Eventually the film was released on laserdisc in the widescreen format (which I still have).
And of course it is now available on DVD in all it's widescreen glory so you can see Barbra and Robert together again, and not in separate shots.
Posted by Hart at 11:09 AM No comments: 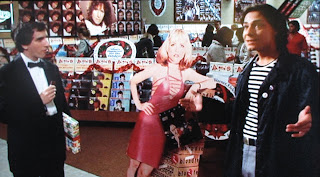 I remember when I first saw this movie back in the early '80s. I tried not to squeal too much in the theater. It instantly become my favorite movies because of this scene. Look closely and you can see Neil Diamond, Rod Stewart, Adam Ant and Blondie along with Barbra.
Posted by Hart at 6:22 PM No comments: