ASIB last of the candids 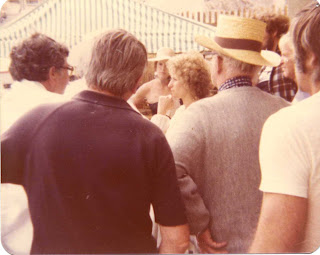 This is the fourth and last :( of the candids I have from the Sun Devil Stadium concert.
Posted by Hart at 3:54 PM No comments: 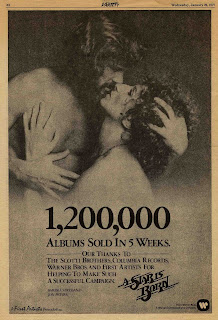 One of those albums was sold to me.
Posted by Hart at 9:43 PM No comments: 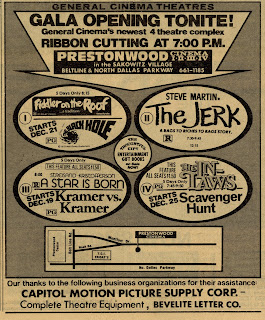 A Star is Born was brought back by popular demand in Dallas in December 1979. By that time the film was well past is run in the theaters so this was a pleasant surprise. Unfortunately I didn't see it at this theater. Dallas was a long schlep for me and ASIB was only showing for 5 days. By this time I had no choice but to wait patiently for it's eventual airing on network television.
Posted by Hart at 10:43 PM No comments:

On location with ASIB 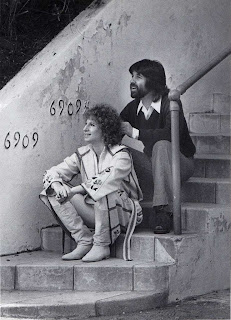 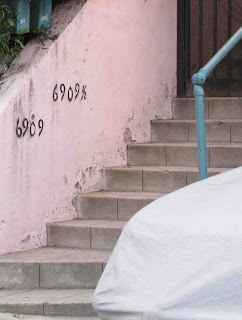 From Esther Hoffman's apartment. The angle is a little off because that covered car was blocking my view.

Don't believe what you read! Part 10 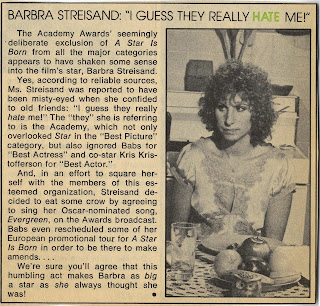 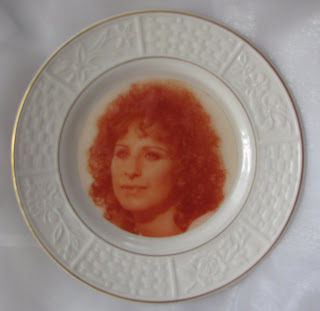 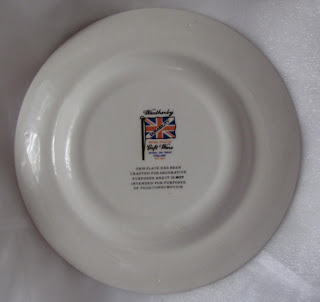 I don't know much about this collectable. Was it a promo item from the premiere? Was it sold to the public? If anybody has an idea, please let me know.
Posted by Hart at 4:32 PM No comments: 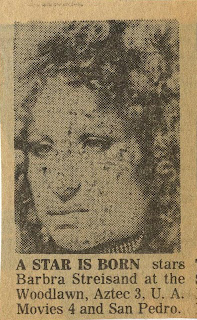 A couple of clippings of "filler" for the movie times page from the paper. These are from later in the film run. The Woodlawn was an old neighborhood theater. The Aztec 3 was a downtown San Antonio movie palace that had seen better days (has since been restored thank goodness). The U.A. Movies 4 was a cracker box theater. The San Pedro was a drive-in.
Posted by Hart at 6:40 PM No comments: 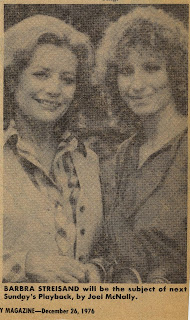 I remember watching the well-publicized Barbara Walters interview. This was a big deal back then. It was Barbara Walters first special for ABC (after being on NBC for years). It was unheard of back then to have a prime-time interview on network television to basically promote a movie- and on the same show interview the next president. 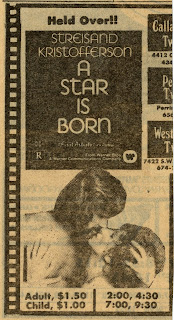 It seems San Antonio couldn't get enough of A Star is Born . . . .and at affordable prices. 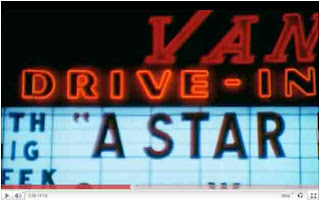 This is a screen capture from a low-budget comedy, Can I do it 'til I need Glasses? It's a quick shot establishing a scene taking place at a drive-in. The movie was released in August 1977. The marquee is from the Van Nuys drive-in and the movie is "A Star . . . ." Well what else could it be? A Star is Born!
Posted by Hart at 4:17 PM No comments:

Don't believe what you read! Part 9 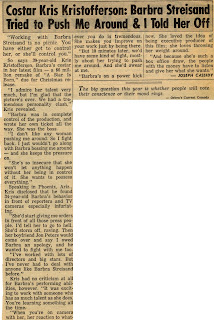 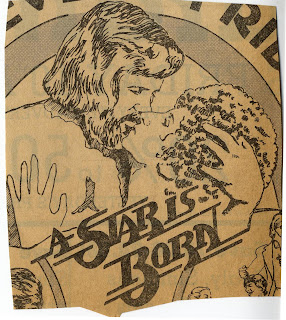 I clipped this image out of the newspaper. My best recollection is that it's from the cover of the weekend entertainment section either talking about upcoming Christmas events or a review of the year in entertainment. As I've said before, I wish I had kept the whole cover.
Posted by Hart at 6:21 PM No comments:

The theater strayed away from the classic Scavullo portrait and used this publicity photo instead.
Posted by Hart at 5:53 PM No comments:

Gary Busey on A Star is Born 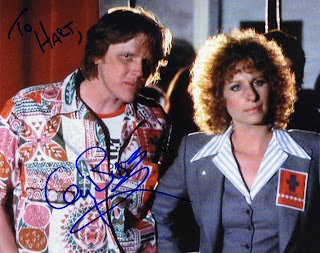 Had the chance to meet Gary Busey earlier this year. I asked him about filming on A Star is Born and how tough was it on the set. He said, "I didn't have a problem. It was an easy shoot for me. It was tough for Barbra. It was tough for Jon. And Kris was at the tequila bar!"
Posted by Hart at 5:58 PM No comments: 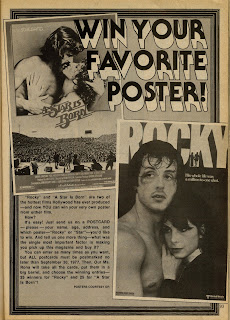 Decisions, decisions. Should I go with A Star is Born or Rocky? Didn't matter, I didn't win. Between the Charlie's Angels and Starsky and Hutch posters, a reproduction of the SIB poster was available at Spencer Gifts (a retail store) for a short period. I bought one there. Eventually, I bought a real one used in the movie theaters from National Screen Services.
Posted by Hart at 5:50 PM No comments: 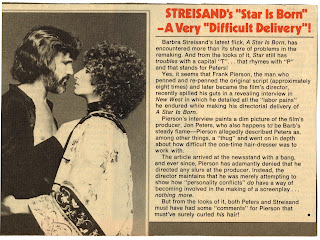 Another one of those "gossipy" articles that I love to read.
Posted by Hart at 12:48 PM No comments: 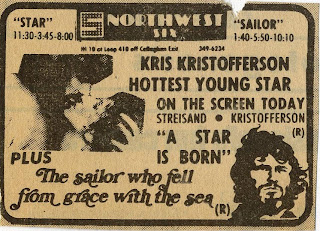 While Kris had made some films before, A Star is Born was his big break. His popularity and exposure increased so much that they even had a double feature of HIS films at the theater.
Posted by Hart at 8:42 PM No comments: 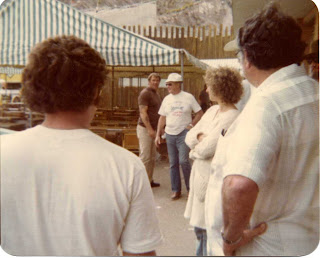 I've posted a couple of these candids before from the Sun Devil Stadium filming. Here's another.
Posted by Hart at 7:16 PM No comments:

Don't believe what you read! Part 8

I wanted to post this under the "don't believe what you read" title because I seriously doubt Barbra edited the movie on the kitchen table. However, it's been documented that she did edit her version of the film after Pierson submitted his cut to Warner Brothers studio. So there is some truth to this story.
It makes you wonder if they would ever release the director's version of the film (or if it even still exists). Would it consist of alternate takes or additional scenes? Less Barbra and more Kris? One can only wonder.
Posted by Hart at 7:50 AM No comments: 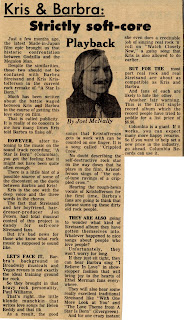 Here's a review of the SIB soundtrack from a San Antonio Express-News writer. While he gave the album a mixed review, I love it. 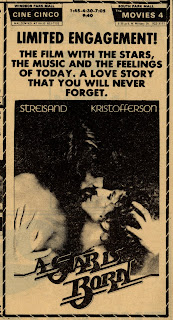 Here's a newpaper ad from San Antonio for a "limited engagement" of A Star is Born. I like the additional text they added to the clip art. How true, it is indeed a love story you will never forget. As I've mentioned before A Star is Born played in the San Antonio area for about a year at various theaters.

The Cine Cinco theater had opened the previouis summer at the then new Windsor Park Mall. Sadly, the mall is now closed. The theater screens were small and rather bare anyway. The Movies 4 was way on the other side of town at the South Park Mall. I made my one and only trip to the South side to see the movie there. I remember by this time the print they had was pretty chopped up. The movie would jump a few frames sporadically during the movie including during Evergreen! I was livid.

I've got a bunch of stuff from A Star is Born, so I'm going to continue with it and dedicate July to that movie. I hope you don't mind (as if anybody would!).

A Star is Born premiere 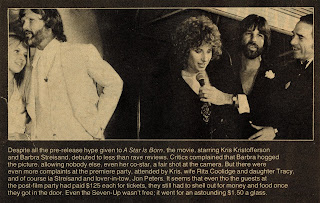 The bad press surrounding A Star is Born continued even at the premiere. But 30 days and 21,000,000 dollars later, Barbra has the last laugh. 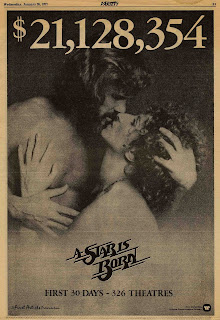