Close Encounters of the Barbra Kind No. 15 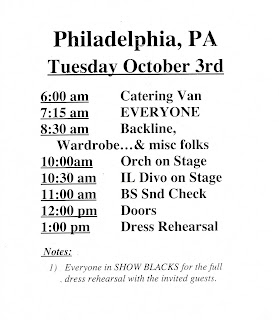 I attended the October 4, 2006 concert in Philadephia.

While at the concert, I was able to acquire the sheet of paper above about the dress rehearsal from the day before. Just an interesting souvenir.

The one thing I remember about this concert, is that her voice was hoarse. She cough a few times during the opening number! But don't worry, her voice got better as the concert (and tour) continued.

This concert was a little longer than the others. A lot of pitter-patter with Il Divo was deleted after this concert.

Meet the Fockers on location 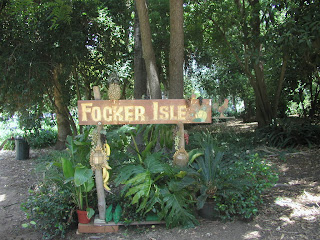 During June 2004 I visited Los Angeles with my friend Robin to attend "An Evening with John Kerry & Friends" at the Disney hall. During this time, the filming of "Meet the Fockers" was in production.

We knew one of the locations was at the Queen Anne house at the Los Angeles Arboretum. So we had to take a side trip there. At the time, they were not shooting at that location. So we pretty much had complete access to the area.

We talked to a production assistant who was there. His job was to refill the lake with water. We of course quizzed him about the movie. He mentioned that they filmed a football scene in this one open field. I asked if Barbra played in the game and to my amazement he said yes!

The sign in the photo above makes a brief appearance (about one second) in the movie when the Fleetwood motor vehicle first arrives at the Focker house.
Posted by Hart at 5:51 PM No comments: 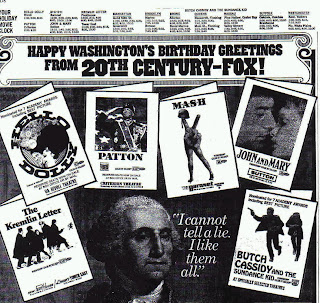 Hey wanna go see a movie this weekend? I've got Monday off for Washington's birthday (I guess they didn't celebrate Lincoln's birthday in 1970). Too late to see Funny Girl at the Criterion now (Patton is doing boffo biz there now). We better hurry up and see Hello, Dolly! before it leaves. Maybe you'd like to see her husband in M*A*S*H? Or future co-star Redford in Butch Cassidy? Or future co-star Dustin Hoffman in John and Mary?
Can't wait for summer when On a Clear Day opens.
Posted by Hart at 9:05 PM No comments: 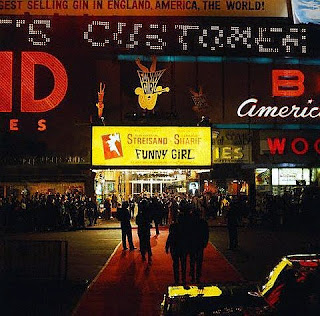 Here's a shot I found on the internet- the Funny Girl premiere at the Criterion theater in Times Square. I've seen similar photos in black and white, but never in color. I found this shot a few years ago so I don't know who to give credit to (so please excuse me if I'm breaking any laws!). But this photo is worth going to jail for. I seem to remember reading a comment from a reader regarding this photo that the two small Funny Girl logos above the marquee rotated. Can anybody out there who attended the premiere verify this?
I've seems there would be newsreel footage somewhere covering this event- the press was there. But in 1968, you didn't have the national or syndicated entertainment shows you have today, let alone channels devoted to nothing but that. Seems somewhere in the Columbia vaults they would have film archiving this event- it's certainly not on the DVD. Maybe they are saving it for the blu-ray disc.
Posted by Hart at 8:47 PM No comments:

My first exposure to First Artist's logo was during the opening credits of "A Star is Born". At that time it simply consisted of the name in a stylized font.
Imagine my surprise when I saw the above image during the opening credits of "The Life and Times of Judge Roy Bean" when it aired on network television (sometime after the opening of "A Star is Born"). If you watch the DVD, the logo is still there today.
Posted by Hart at 7:23 PM No comments: