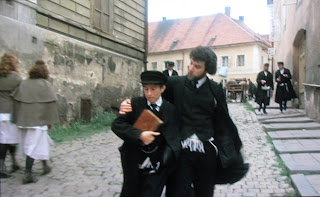 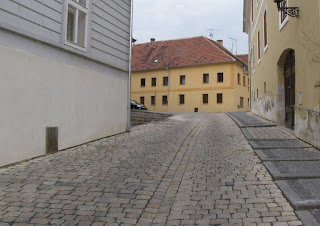 Another shot.
Posted by Hart at 5:31 PM No comments: 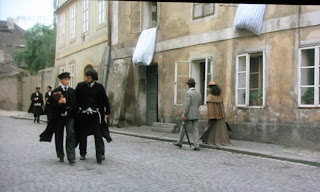 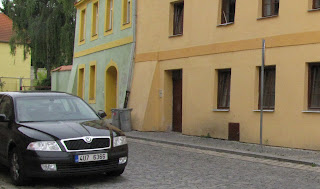 I recently returned from a family trip to the Czech Republic. Besides visiting some distant relatives, my main objective was to visit the town of Zatec which is one of the locations where Streisand's masterpiece Yentl was filmed.
Before the trip, I watched the DVD and photographed the exterior scenes directly from the TV screen. Amazingly, the photos turned out better than I thought (see first photo above). Armed with these photographs as reference, it was just a matter matching up the photos with the real building locations.
Simple, right?
Unfortunately, my time in the Zatec was limited. Our driver (a third cousin) didn't want to spend a lot of time there because he was worried about the traffic back to Prague (he was also 84 and didn't speak English). When we arrived, we found the clock tower right away. It was located in the older part of town and was easily identifiable.
From there it became a scene out of The Amazing Race. I had a limited amount of time to find the remaining locations. Luckily a fifth cousin came along with us for the ride (along with my parents). She was 23 and had never heard of the movie. She also became our interpreter since she also spoke English. I would give her a photo and ask her to ask one of the villagers if they knew where this location was. This strategy work pretty well as we were able to find most of the locations with the amount of time we had.
I'm starting out the scene immediately following "The Way He Makes Me Feel"-one shot from the movie and another how it looks today. As you can see the buildings have been repainted sometime in the last 26 years. I guess that's progress. Personally I like the buildings unpainted- gives it a sepia tone look.
Anybody know how to say "Move the car, you're spoiling my shot" in Czech?
I'll be posting additional photos in the near future.
Enjoy.
Posted by Hart at 6:47 PM 4 comments: 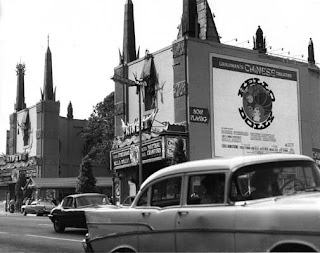 For repeat viewing, "Hello, Dolly!" is probably my favorite of her "old-fashioned" musicals. You can't help but feel better after listening to the soundtrack.


My first screening of "Hello, Dolly!" was at a midnight show at the Campus theater in College Station, TX (of all places) in January 1977. I was there for a Texas A&M football game. And what better way to celebrate a football victory than watching "Hello, Dolly!" in a college town!

My second viewing was at the Olmos theater in San Antonio when it was a repertory theater (I also remember it was on a Sunday). It was a double feature with "The King and I". I went with a friend (who had only seen the movie on TV during a daytime airing). He freaked out during the opening number. Turns out the version he had seen edited out the opening number! He thought it opened with the credits.

When the movie was over, we just had to see it again. We went up front and asked if we could skip "The King and I" and come back and see "Hello, Dolly!" again because we were Barbra fans. The manager agreed. We went flea market shopping (always on the lookout for Barbra memorabilia) that afternoon and came back for the second screening.

We drove back home. This was during the summer and my friend had an evening job he had to go to. Well I didn't and my parents were out of town so what was I to do? Drive back to the "big city" and see the last showing of "Hello, Dolly!" what else?

The photo above is from the roadshow engagement of "Hello, Dolly!" at Graumann's Chinese Theater in Hollywood, CA. (from the L.A. county library).
Posted by Hart at 8:36 PM 1 comment: 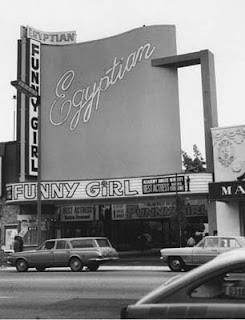 I vaguely remember seeing Funny Girl on the big screen for the first time (For reference, I was born in 1960). The only thing I can remember is commenting to my parents that I liked the tug boat scene. I was too young to really appreciate it at that time.

My next Funny Girl memory was seeing part of it on network television in the early '70s. Again, too young to appreciate it.

By 1976 when I became a Streisand fan, I was reading any books and old articles that I could find about her. My first book was Barbra: The First Decade. I seem to recall reading somewhere around this time that Funny Girl played for over a year at the Criterion theater in Times Square! I found that hard to imagine.

I lived in a small town near San Antonio, Texas and we had only one theater- an old neighborhood type theater. Movies weren't released like they are now where they open wide everywhere. If it was an American International Picture or a Burt Reynolds movie, we might get it opening week. If it was a major motion picture, like Posideon Adventure or Towering Inferno, it would literally be six months before it played in such a small market like our town. And when they did, it would only play for a week. So I just couldn't phantom any movie playing for such a long period of time.

It would be decades later before I researched "roadshow" films and their history. I missed out on that period of exclusive 70mm screenings in 6-track stereophonic sound. Born too late, in a small town.

There are great websites that can give you more insight into that era: http://www.widescreenmuseum.com/ and http://www.in70mm.com/.

Back in the late '70s and early '80s there were some retrospective theaters that showed old movies on the big screen (before the rise of videotape) in Texas. They would show double features and change the schedule every day or every other day. In the early '80s, I had the chance to see a double feature of Funny Girl and Funny Lady in Austin, TX. Imagine my surprise seeing Funny Girl in widescreen Panavision (instead of cropped on TV). I remember watching My Man and comparing it to seeing it on TV. I didn't know she had her hands in view when she sings "when he takes me in his arms".

It was disappointing in the early '80s when the VHS tape of Funny Girl was released. It was pan and scan. Not counting a limited laserdisc version in the early, it wouldn't be until 2001 that a widescreen version was available for home viewing.

A limited re-release of Funny Girl played in theaters during this time. Living in South Florida now I hoped and prayed it would make an appearance down here. Unadvertised, it had a one week engagement in Delray Beach and Boca Raton (no display ad, no review). Needless to say very few people were aware of it and attendance was dismal.

Above is an image of the Egyptian theater in Hollywood, CA during the roadshow engagement of Funny Girl. Photo is from the Los Angeles County Library website. 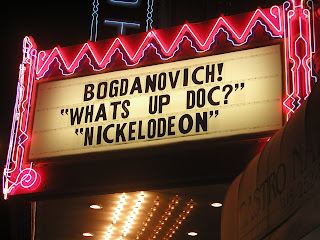 The purpose of this blog is to share my Barbra Streisand collection of memorabilia with fellow Stresiand fans around the world. I will try to focus on stuff that is unique and personal or at least stuff I haven't seen anywhere else.

I have been a fan since January 1976 when I first saw "What's Up, Doc?" on network television. If memory serves me correctly, it was a Friday night on ABC. I don't remember the exact date (one of these days I'll research it). I don't think I had ever laughed so hard at a movie (not counting "It's a Mad, Mad, Mad, Mad World").

Therefore, I will start rolling out my collection with a photo of a movie marquee showing "What's Up, Doc?" It is from a screening at the Castro theater (San Francisco) from February 2008. (again, I'll research the exact date one of these days). Director Peter Bogdanovich attended and spoke to the audience. Most of what he said is included in the comments on the DVD.