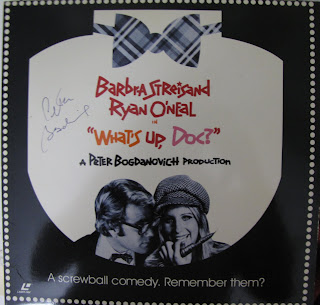 Well, that wraps it up for the What's Up, Doc? filming locations.

A couple of sites, in particular, were left out for various reasons.

The Alta Plaza concrete stairs were used for the chase scene when all the cars drove down them in the park. I had been there before on a previous trip, but I can't find a good shot from the same angle. And for whatever reason, I didn't visit them again on this trip. But I can tell you, they haven't changed in the past few decades.

The "Sausalito pier" is not the one actually used for the ferry today (and it was probably not used for it back then either). From the backdrop of the Bay Bridge I have a general idea where it located, but did not venture down that way.

Regardless, a great script, fantasitc chemistry between the leads, a stellar supporting cast, wonderful city locations and a brilliant director makes What's Up, Doc? one of my top 5 favorite Streisand films. Hopefully it's one of yours too.
Posted by Hart at 7:21 PM