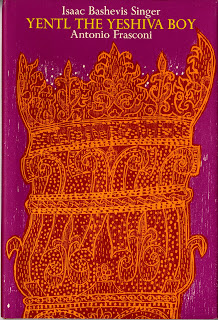 I bought this hard-bound book around the time of the movie's release. The best I recall, there wasn't a novelization of the movie published in the U.S. No cross-promotion. No mention is made of the movie on the jacket cover.

During the early part of 1984 Singer gave a speech at Trinity University in San Antonio and to read an excerpt from a new book he had recently released. At the end of lecture, he took questions from the audience. The first question was from someone asking for his reaction to Streisand's version of Yentl (before I could ask). At the time there were reports he wasn't happy with the changes she made to the story. I can't quote verbatim what he said, but I remember he remained nuetral on the subject- something along the lines that the movie was her version of the story and not his. He wasn't exactly praising the movie, to my disappointment.