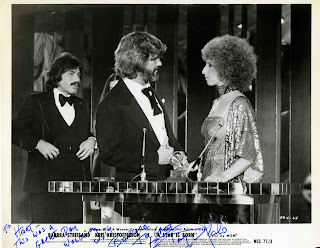 Tony Orlando performed last night in Boca Raton, Florida for a benefit (no- not the Indian relief fund). I waited by the stage door for him to arrive and get a quote from him regarding his experience working on A Star is Born.

I told him I was a Barbra fan and he was gracious. His assistant had never seen this photo before and asked me when did I get it. I told him I've had it since the '70s. Tony stared at the photo first and commented about Rita Coolidge being hidden in the photo.

While he signed a nice inscription I asked how did he get the job, who contacted him. He said, "Barbra". He said she was great too. He proceeded to the stage door before I could ask him a follow-up question like what was the verbatim conservation they had? Did he know her before the phone call? How did the shooting go? By any chance did you hear her brag, "I'm the boss and I won't let anyone stand in my way"? Inquiring minds want to know!

In the moment with him I forgot to get a photo of him. He didn't arrive to the theater until 9:15 and I'm usually in bed by 10 p.m. on a work night so I didn't stick around until after the performance. Which, in hindsight, I regret because it's also a better time to ask questions.

He tours year round so maybe we'll cross paths again. He's got a website with tour dates. Maybe he'll perform near you. I'm sure he would like to hear more comments about working on A Star is Born. He must be tired of "Yellow Ribbon" comments by now.
Posted by Hart at 6:23 PM