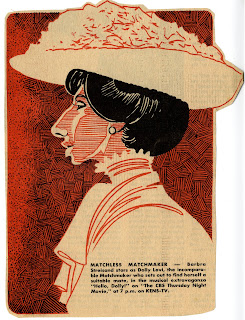 Artwork promoting the television premiere of Hello, Dolly! from the local San Antonio newspaper insert TV Now. It's a rather odd piece. I don't remember an outfit or hat like the one she is wearing or her hair being black in the movie. Was probably done by a local artist for the cover. I doubt that it was given to the newspaper from the studio or the network.

Was given to me by my friend Larry way back in high school after I became a Barbra fan. This was already clipped from the cover of the guide. Yes, I know it would probably be worth a lot more if I had the whole magazine now. But back then, who knew?

I vaguely remember the first network airing being promoted back then (1973-1974?). I didn't see it then and it was probably just as well. Since it was filmed in 70mm, this movie was meant to be seen on the big movie screen- not cropped with commercials on a small TV screen. And you didn't have stereo television back then either.
Posted by Hart at 1:58 PM