Barbra's "cameo" in The Gumball Rally 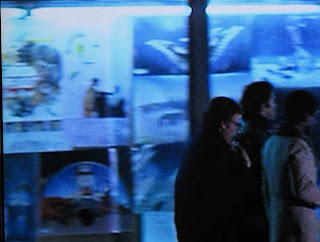 Barbra makes a "cameo" in the 1976 comedy The Gumball Rally. There's one scene with a camera tracking the three characters walking down a New York City street. In one of the storefront windows you can see a Funny Lady movie poster. The screen capture is a little blurring because the camera is constantly moving, but any eagle-eyed Streisand fan can see the poster.
I'm not sure but I think this is the "backside" of Colony records. The scene starts with a shot looking down Broadway with the Winter Garden Theater visible on the left side of the screen (Pacific Overtures was playing there at the time). The actors cross the street heading West with the camera following them.
Posted by Hart at 3:51 PM